Programming in Modula-3: An Introduction in Programming with Style - gebunden oder broschiert

Programming in Modula-3: an Introduction in Programming With Style - gebunden oder broschiert

Hardcover, "Ships with Tracking Number! INTERNATIONAL WORLDWIDE Shipping available. May not contain Access Codes or Supplements. May be ex-library. Shipping & Handling by region. Buy with… Mehr… 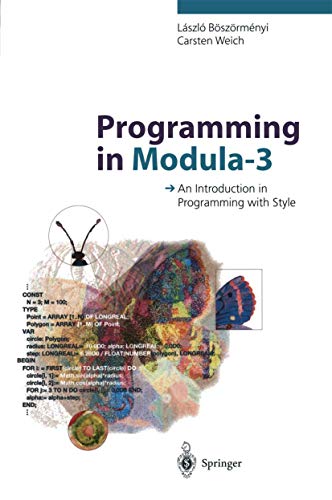 by Joseph Weizenbaum Since the dawn of the age of computers, people have cursed the difficulty of programming. Over and over again we encounter the suggestion that we should be able to communicate to a computer in natural language what we want it to do. Unfortunately, such advice rests upon a misconception of both the computer and its task. The computer might not be stupid, but it is stubborn. That is, the computer does what all the details of its pro­ gram command it to do, i. e. , what the programmer "tells" it to do. And this can be quite different from what the programmer intended. The misun­ derstanding with respect to tasks posed to the computer arises from the failure to recognize that such tasks can scarcely be expressed in natural language, if indeed at all. For example, can we practice music, chemistry or mathematics without their respective special symbolic languages? Yet books about computers and programming languages can be written more or less reasonably, even if they are not quite poetic or lyrical. This book can serve as an example of this art and as a model for anyone at­ tempting to teach inherently difficult subject matters to others. Klagenfurt, April 1995 Preface Striving to make learning to program easier, this book addresses primarily students beginning a computer science major. For our program examples, we employ a new, elegant programming language, Modula-3.

Detailangaben zum Buch - Programming in Modula-3: An Introduction in Programming with Style