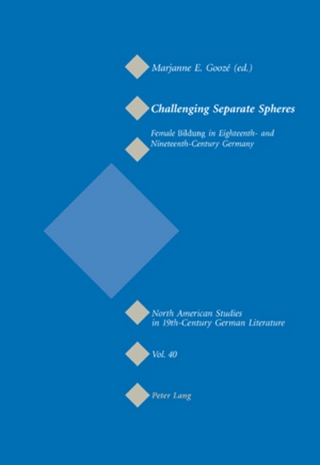 This collection of essays centers on women writers who negotiated, interrogated, and challenged the gender ideology of separate spheres through their advocacy and representations of female 'Bildung'. The term 'Bildung' encompasses an individual's entire moral, spiritual, behavioral, emotional, political and intellectual development. The contributors analyze works of fiction, memoirs, autobiographies, letters, the periodical press, and conduct and cookbooks from the mid-1700s to circa 1900 that confront the separate spheres paradigm and promote women's educational and personal development. They examine women's writing and reading practices, moral and gender philosophies, political activism, and work from the home to the stage and factory. Most writers did not repudiate outright existing gender models, but both subtly and overtly subverted and reinterpreted them. In all the texts, the process of female education leads to an assertion of agency. The writers came from different social classes and professional backgrounds, ranging from noblewomen to working-class autobiographers of the later nineteenth century. This volume will be of interest to German cultural, literary, and historical scholars, as well as to those concerned with the development of European feminism, women's education and autobiography.