(*)
Committee to Protect Journalists (CPJ):
Attacks on the Press: The New Face of Censorship (Bloomberg) - Erstausgabe

Bloomberg Press. Used - Good. All orders guaranteed and ship within 24 hours. Your purchase supports More Than Words, a nonprofit job training program for youth, empowering youth to take charge of their lives by taking charge of a business., Bloomberg Press, 2.5

Attacks on the Press: The New Face of Censorship (Bloomberg) - Erstausgabe

Attacks on the Press: The New Face of Censorship (Bloomberg) - Taschenbuch

Bloomberg Press. Used - Good. All orders guaranteed and ship within 24 hours. Your purchase supports More Than Words, a nonprofit job training program for youth, empowering youth to take charge of their lives by taking charge of a business., Bloomberg Press, 2.5< 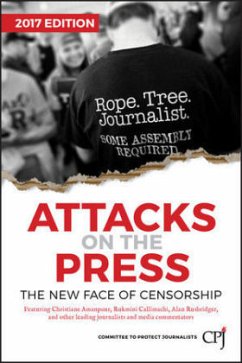 The latest, definitive assessment of the state of free press around the world

Attacks on the Press is a comprehensive, annual account of press conditions worldwide, focusing this year on the new face of censorship perpetrated by governments and non-state actors.

Compiled by the Committee to Protect Journalists (CPJ), the 2017 edition documents new dangers and threats to journalists and to the free and independent media. The risks are a combination of familiar censorship tactics applied in novel ways, and the exertion of pressure through unconventional means or at unprecedented levels. These censorship efforts range from withholding advertising to online trolling, website blocking to physical harassment, imprisonment to the murder of journalists.

In the Americas, governments and non-state actors use new, sometimes subtle ways to limit journalists' ability to investigate wrongdoing. In Europe, authorities deploy intelligence services to intimidate the press in the name of national security. In Asia, governments block access to information online, and in some cases, punish those who manage to get around the obstacles. And throughout the world, terror groups are using the threat of targeted murder to compel journalists to refrain from covering crucial stories or otherwise self-censor.

Attacks on the Press documents how these new forms of censorship are perpetrated and provides journalists with guidance on how to work around them, when possible, and how to ensure their own safety as well as the safety of their sources and people with whom they work. The book enables readers to: Examine the state of free media around the world Learn which nations violate press freedom with impunity Discover the most dangerous beats and regions Delve inside specific, increasingly complex challenges

CPJ's mission is to defend the rights of journalists to report the news without fear of reprisal. Attacks on the Press provides a platform for direct advocacy with governments and the diplomatic community, for giving voice to journalists globally, and for ensuring that those journalists have a seat in discussions at the United Nations, the Organization of American States, the European Union, the African Union, and others.

Detailangaben zum Buch - Attacks on the Press: The New Face of Censorship (Bloomberg)

Introduction: The New Face of Censorship 1 Governments and non-state actors fi nd innovative ways to suppress the media. By Joel Simon 1. Where I've Never Set Foot 7 Barred from Syria, a journalist must make sense of what she's told. By Alessandria Masi 2. From Fledgling to Failed 15 Even as the country collapses, South Sudan's government will brook no criticism. By Jacey Fortin 3. A Loyal Press 25 Independence means isolation for journalists in Sisi's Egypt. By Ursula Lindsey 4. What Is the Worst-Case Scenario? 37 American journalists grapple with the Trump presidency. By Alan Huff man 5. Thwarting Freedom of Information 49 Agencies exploit every loophole to evade disclosure requirements. By Jason Leopold Case in Point 59 A journalist details one fi ght over records requests in the United States. By Michael Pell 6. Disrupting the Debate 67 Governments use copyright laws and Twitter bots to curb criticism on social media. By Alexandra Ellerbeck 7. Discredited 73 Journalists' online activity could hurt their fi nancial standing under a new Chinese plan. By Yaqiu Wang 8. Chinese Import 81 Russia tries to emulate Beijing's model of information control. By Emily Parker 9. Willing Accomplice 87 Collusion by the Turkish media compounds the country's crisis. By Andrew Finkel 10. Edited by Drug Lords 97 Mexican journalists navigate threats and censorship by cartels. By Elisabeth Malkin 11. Self-Restraint vs. Self-Censorship 105 How much should journalists hold back when covering terrorism in Europe? By Jean-Paul Marthoz 12. Connecting Cuba 115 Outdated laws and limited, expensive internet access slow the island nation's progress. By Carlos Lauría 13. Supervised Access 121 North Korea masks deep censorship by admitting foreign reporters. By Jessica Jerreat 14. Fiscal Blackmail 133 The Kenyan government withdraws advertising when newspapers step out of line. By Alan Rusbridger 15. Right Is Might 159 We have the laws and institutions to fi ght attempts at information control. By David Kaye 16. Eluding the Censors 167 For all its faults, Facebook is a lifeline for journalists in lessdeveloped countries. By Karen Coates 17. Zone of Silence 177 The public is robbed of information when journalists are murdered. By Robert Mahoney 18. Being a Target 187 A reporter learns how to dodge terrorist threats to get the story. By Rukmini Callimachi 19. Fighting for the Truth 193 Journalists have a huge amount of work to do. By Christiane Amanpour Index 199