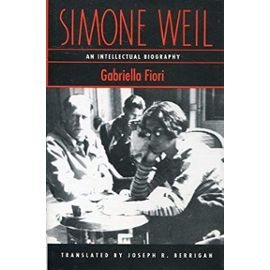 "Simone Weil" traces the intellectual life of a woman whose "madness for truth", in the words of Albert Camus, allowed her "to understand, beyond her most natural prejudices, the illness of her approach and to discern the remedies". Born in 1909 in Paris, France, the second child of well-off Jewish parents, Simone Weil died in 1943 of self-starvation, leaving behind a collection of letters, notebooks, essays and poems that embodied the elements of her fiery, complex thought. Gabriella Fiori's biography of Simone Weil aims to set the woman and her thought within the context of her times. Fiori follows Weil from her childhood through her years in school, where she began to formulate the rigorous ideas that she later focused on a European world charged by war and revolution. As a teacher, activist, and worker, Weil felt every current that swept through Europe yet was carried away by none of them. Involved with unions and the Communist party, travelling to Germany to witness the rise of fascism and to Spain to fight with anarchists, Weil sought to pin each movement to the facts and to the truth of its ideals. Working in factories and later as a grape picker in the fields of southern France, Weil felt "the sense of not having any right" and wrote forcefully about the relation of man to the industrial machine. In her final work, "L'enracinement", Weil gives an account of what, in her view, are the symptoms, causes, diagnosis and therapy for the illness of Europe.