Two Times Intro: On the Road with Patti Smith - Erstausgabe 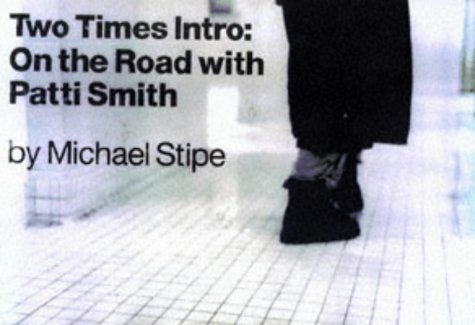 When singer Patti Smith toured in 1995, for the first time in almost 20 years, R.E.M. frontman Michael Stipe tagged along as tour photographer. Two Times Intro is the resulting photo diary--as Stipe calls it--and it's filled with his moody black-and-white prints and Polaroids (taken with an ancient camera by Smith guitarist Oliver Ray) that capture a specific mood of Smith's as she moves through the shifting, impersonal spaces--taxis, concrete backstage areas, empty theaters--of life on tour. Stipe is a long-time Smith fan, as he recalls in an essay in the book: he "bought her first album the day it came out. It was mind-blowing--emotional and imperfect, swirling, B&W." His photographs of Smith and her band mates display the same emotional intensity and incongruity that her music originally stirred in him. The layout, executed completely in black and white with echoes of imperfections like torn Scotch tape, creases, and torn edges seemingly photocopied onto the page, gives readers a sense of watching an ancient black-and-white television--scratchy, static-filled, impenetrable, and mysterious, but also somehow comforting. All of this is evocative of both Smith's music and her lyrics, and in that it is a strange but fitting homage to her. Stipe intersperses throughout the images musings about Smith by the likes of William S. Burroughs, who calls her "a shaman--that is someone in touch with other levels of reality," Sonic Youth's Thurston Moore and Kim Gordon, and long-time friend and fellow musician Lenny Kaye. Ultimately, the book is not a photographic triumph but it should be very compelling to Smith and Stipe fans alike.