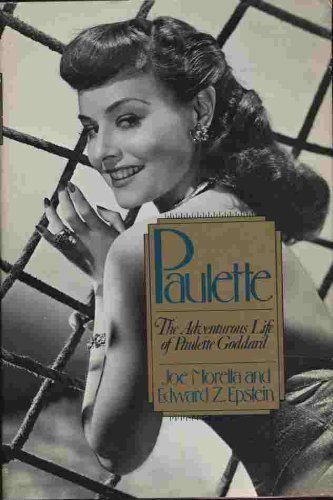 Paulette Goddard was already a legend during her lifetime. At her peak she was considered one of the sexiest, most glamorous, and most personable movie stars of the silver screen. She was known for her marriages to Charlie Chaplin, Burgess Meredith, and Erich Maria Remarque. But few know what an exciting and adventurous life she truly led. From her humble beginnings, Paulette was determined to earn stardom. She quickly reached her goal, starring in films with Bob Hope, Fred Astaire, Gary Cooper, and Jimmy Stewart. For many months she was the top candidate for the part of Scarlett O'Hara in Gone with the Wind, a role that eventually went to Vivien Leigh. Paulette was also a sophisticated patron of the arts, with distinguished friends like John Steinbeck and Aldous Huxley. Through her wit, charm, and intelligence, she always attracted genius. Paulette's many admirers included Clark Gable and George Gershwin. Most favored her with gifts of magnificent jewelry. Soon she had a fortune in precious gems, because, as she put it, "I never give anything back." The star also collected great works of art, and often posed for the famous Mexican painter Diego Rivera.Always in the public eye, her controversial lifestyle prompted the FBI to investigate her, even as she dined at Hyde Park with FDR! In this revealing and insightful account, the authors detail the life and loves of this fascinating woman.They recount her Oscar nomination for So Proudly We Hail, and her participation in the first transcontinental flight, piloted by none other than Howard Hughes. Here also is the answer to the mystery of the Chaplin-Goddard relationship (Were they married or not?); a complete account of her feud with famed movie director Cecil B. DeMille; and the scandalous under-the-table incident at Ciro's. The story of Paulette Goddard's life is more captivating and provocative than fiction.The rare combination of brains, beauty, glamour, and success made Paulette Goddard a one-in-a-billion star.